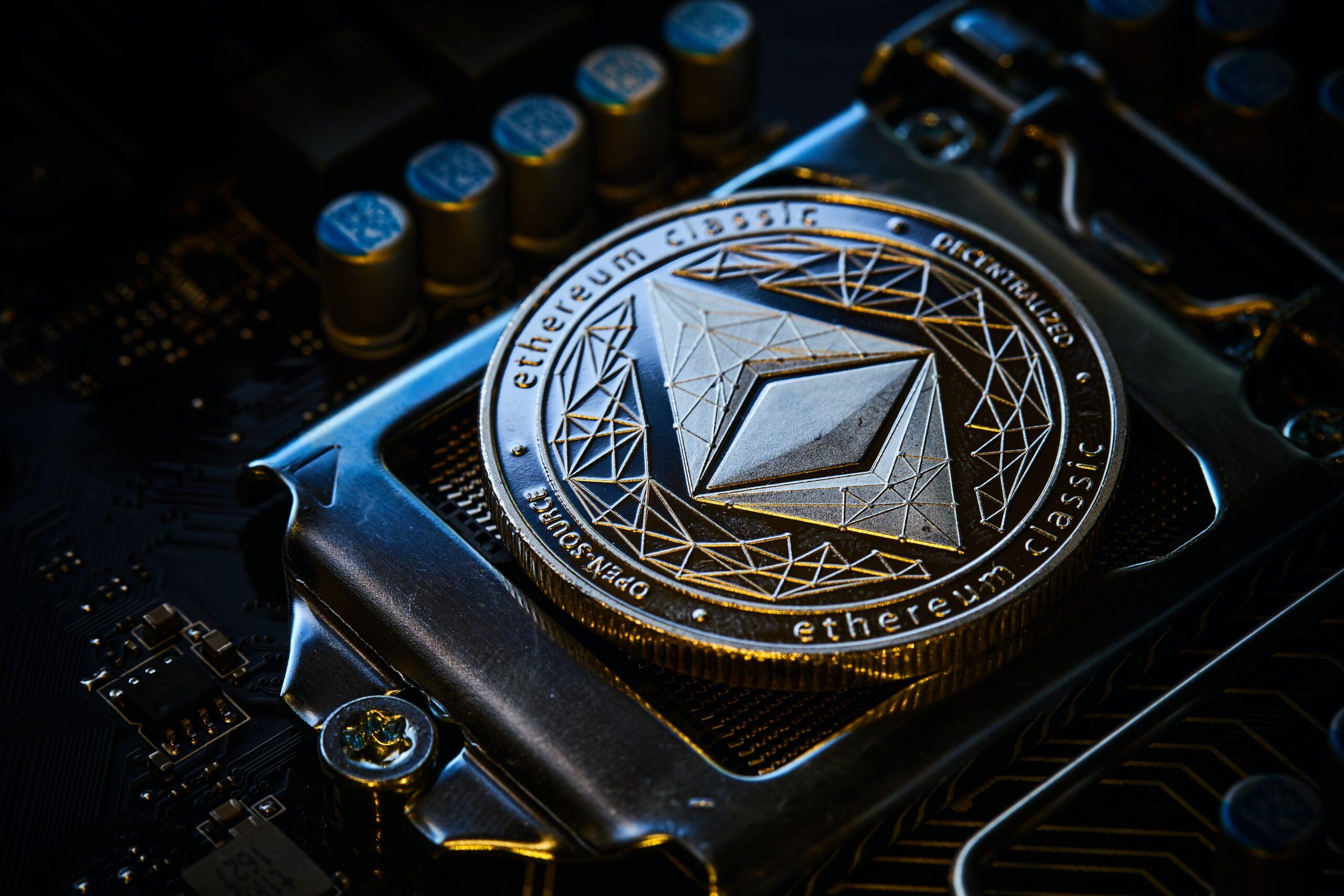 Ethereum (ETH) is the second largest cryptocurrency by market cap, following Bitcoin (BTC). It is a layer one, smart contract capable blockchain that recently switched from a proof of work consensus algorithm to a proof of stake one. This switch dramatically reduced the network’s energy consumption and prepared it for future growth as the blockchain continues to be developed. Ethereum is a direct competitor to other smart contract blockchains such as Cardano, Polkadot, Solana, and the Binance Smart Chain.

Ethereum was proposed back in 2013 by Vitalik Buterin. It gained funding in 2014, and was launched in August 2015. Buterin wasn’t the only founder, but is the only one who really remains, and is certainly now the face of the project (despite his desire not to be). Two of the other founders, Gavin Wood and Charles Hoskinson, left Ethereum to found Polkadot (DOT) and Cardano (ADA), respectively.

Ethereum (ETH) as we know it is actually a fork of the original Ethereum, which is Ethereum Classic (ETC). A hack of the Ethereum blockchain back in 2015 caused a split in the community, as some users wanted to roll back (undo the affected blocks) the blockchain to before the hack, while others wanted to uphold the code and work on the issues.

Ethereum as we know it now, is the side of the debate that wanted to undo the hack by rolling back the blockchain. Those that wanted to keep the hack on chain then launched Ethereum Classic in 2016 as a result of a disagreement on how Ethereum should proceed. Both chains have separate developers, apps, and functionalities. Ethereum Classic still uses a proof of work consensus algorithm too and the hack still exists in its ledger history.

As the popularity of Ethereum (ETH) grew, especially with the growth of the NFT sector, it became increasingly more expensive to use the blockchain, and increasingly more energy intensive. As a result, Ethereum decided to start transitioning from a proof of work system to proof of stake. This would both allow for a reduction in energy consumption and, eventually, a reduction is transaction fees and increase in speeds.

So, the Beacon chain (the first step to merging the proof of work chain with the new proof of stake one) was launched in December 2020. After nearly two years of waiting, the Merge, which formally switched Ethereum from proof of work to proof of stake, was successfully executed on September 15, 2022. It has been likened to turning off a country (in terms of electricity), but is really just the first of many steps still remaining for Ethereum to reach its long-term goals (more on this later).

What Are the Best Uses for Ethereum?

Ethereum, as a smart contract enabled blockchain, has many use cases. This includes decentralized finance (DeFi) applications, token creation, NFTs, and more. We’ll dive into each of these uses now.

All fungible tokens created on Ethereum are ERC-20 tokens. This includes all of the assets available on Ethereum such as Shiba Inu (SHIB), USD Coin (USDC), USD Tether (USDT), Wrapped Bitcoin (WBTC), Uniswap (UNI), Apecoin (APE), the list goes on. The ERC-20 token standard makes it easy for developers to create and launch tokens, and is part of the reason for the 2017 ICO craze, as it was suddenly easy for people to create their own cryptocurrency.

ERC-20 tokens allow for the easy creation of many different applications on the Ethereum blockchain, such as DeFi apps, which we’ll discuss momentarily.

Non-fungible tokens (NFTs) on Ethereum are ERC-721 tokens. Unlike fungible ERC-20 tokens, NFTs are unique and can have a different value than another NFT from the same smart contract. This can be due to its age, rarity or even something else like the image attached to it.

NFT art is often the first thing that comes to mind when thinking of NFTs, but NFTs have much wider ranging potential use cases. NFT games are one of the biggest potentials, as games developed with NFT components will allow players to either earn money playing the game or at a minimum, be able to resell things they purchased. But there is the potential to use NFTs for ticket sales for concerts and events, as proof of ownership for physical property, and even something like a carbon credit.

Perhaps the most lucrative use case of Ethereum is decentralized finance, or DeFi. DeFi services are much like traditional finance services, but with some stark differences. DeFi can be accessed anytime, anywhere, and is not subject to banking hours, credit checks, or any of the other restrictive aspects of traditional financial systems.

With traditional finance, the bank, lender, exchange, etc., is the party that reaps the rewards in the form of interest, commissions, or trading fees when the platform is used. With DeFi this reward is given to the users. This is because in DeFi users, such as yourself, provide the platform with the tokens available for trading, lending, and borrowing. Users are then the ones who receive the rewards at a proportional rate to their provided assets.

DeFi creates an opportunity to recreate the world’s financial systems, allowing those without access to banking to access them as long as they have an internet connection. Whether an exchange, lending platform, or yield aggregator, DeFi has a variety of platforms for users. It provides not only an opportunity for passive income that outweighs traditional options, but also a source for loans for those that have difficulty getting approval through their local banking systems.

Can You Stake Ethereum?

Yes, thanks to the switch from proof of work to proof of stake, you can now stake Ethereum. Previously, you could only mine Ethereum. What is Ethereum mining? Well, it was a lot like Bitcoin mining, but instead of using ASIC chips, they used GPU. This was the main reason for the very high energy consumption of the Ethereum blockchain as with just a 15 transaction per second processing power, and tons of users trying to do everything from mint NFTs to provide liquidity to a pool on a DEX, the network was always running at max capacity. This causes both high transaction fees and constant energy use by miners processing transactions.

Now that Ethereum has successfully switched to proof of stake with the Merge, users can stake Ethereum as either a delegator or validator. The latter is a much more difficult task, both in terms of financial barrier to entry and technical understanding. To be a validator you must stake at least 32 ETH (over $32,000), while also running a node and validating transactions. The former is much more tenable for the average person, as you can delegate a small amount of Ethereum to a stake pool or validator. You can do this directly on the blockchain from an external wallet, but many cryptocurrency exchanges also offer staking for your Ethereum, which is an easier process for many.

What’s the Long-Term Vision for Ethereum?

The completion of the Merge, which switched Ethereum from proof of work to proof of stake, was just the first of five separate stages. After the completion of all five stages, Ethereum will be able to function as a decentralized world supercomputer, processing everything from digital identities to finances, all without any oversight, at least, this is the end objective. It is hoped that Ethereum will be able to process 100k transactions per second when all the stages are complete. Whether it is able to achieve all five stages within a reasonable timeline and without a competitor beating them to the punch is yet to be seen. The Merge stage, while important, didn’t have any effect on transaction fees or speeds, that will come in later steps. With that said, let’s look at the remaining four stages of Ethereum’s development.

The Surge is the next step in Ethereum’s development and likely when users will actually see a difference in transaction speeds and fees. This is because this stage is the one that increases the scalability of Ethereum through sharding and rollups, which essentially just allows Ethereum to process larger quantities of data more quickly.

The Verge phase will introduce Verkle trees, an upgrade to Merkle trees (a concept first considered with Bitcoin), which also tackles the issue of scalability. With Merkle trees, new blocks of information (leaves) are grouped together to form branches. You can then trace a string of numbers (the Merkle root) that contains all the previous information. Essentially, Verkle trees will allow you to store a large amount of data by showing a short proof of any piece of that data (such as a leaf or branch). This in turn will be verified by someone who only has a root of the tree. This process will then make proofs and Ethereum more efficient.

The goal of The Purge is to reduce, or “purge,” spare historical data that’s currently being included in blocks. Reducing the amount of historical data included in blocks will make the process of validating the blockchain more efficient. This in turn should minimize network congestion and allow many more transactions to be processed on the blockchain. Buterin thinks that after this stage, Ethereum should be able to process 100,000 transactions per second.

The Splurge’s purpose is making sure that the Ethereum network continues to run smoothly and that the updates to the protocol in the previous four stages don’t cause any issues. This is essentially the review stage, and could be a long way off. See image below for visual details on all four remaining stages.

What Is DeFi: A Beginners Guide to Decentralized Finance

It’s been a long wait for the highly anticipated Ethereum 2.0 upgrade. The original plan was to have it completed by the end of 2019 but that deadline came and went. However, work on the upgrade has continued and there has been a lot of progress made. The mainnet launch is now complete but what […]